If you've been watching our dev blogs you'll know that there are some upcoming changes to structures coming on February 13th. This blog will serve as a short summary of the changes that affect ESI and how ESI is going to accommodate those changes. These structure changes will also be the catalyst for the removal of two CREST routes.

Before jumping into the details of what is changing in game and in ESI, it is best to give a higher level view of which ESI routes are affected and how these changes will be handled. There are two ESI routes affected by these structure changes:

Our metrics indicate that the PUT /corporations/{corporation_id}/structures/{structure_id}/ route has no usage. Therefore, we have elected not to create a replacement for the new structure vulnerability system. On release day (February 13th) this route will be labelled as legacy only, start returning deprecated headers, and will always return HTTP status code 204. It will remain this way for two weeks when it will then be completely removed and start returning 404s. If you feel strongly that a replacement is needed, please make a case for it on our esi-issues Github repository.

For more details about what is changing in game and how that will be represented in v2 of /corporation/{corporation_id}/structures, read on.

A low power structure can be identified in the client by a label on their text bracket beside the structure name: 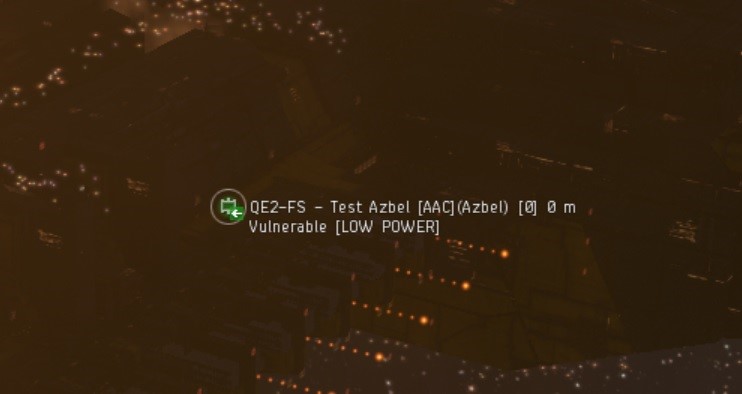 The determination of whether a structure is high or lower power will be left to third party developers at this time. But there is only one question you need to answer to determine if a structure is in full power mode:

Does it have more than 0 online service modules?

This is because the state of it's service is "online". If the service's state was "offline" it would be considered low power.

The February 13th release will see a change to the systems surrounding structure vulnerability and reinforcement. Attacks against upwell structures will now consist of a possible three phases depending on whether the structure is in full power or low power mode:

Under this new system, the shield hitpoints of Upwell structures will be vulnerable to attack at all times. This allows attackers to attack at any time they choose. If a structure's shields are brought to 0 it will either enter its first reinforced state if it is at full power or go straight to it's final reinforced state. Here is a flow chart detailing all the states a structure can be in with the new system:

For more detailed information about the new reinforcement system please see this blog.

Each structure displayed by /v2/corporations/{corporation_id}/structures/ will have three new required properties and three optional properties to represent these in game mechanics.

The required properties are:

As CREST is in maintenance only mode, it will not be updated to reflect the new system. On February 13th, both CREST endpoints will simply be deleted, and will start returning 404 errors.

We're excited to continue releasing new features in ESI along with new features in the game. Happy structure hunting and as always you can chat with us and our helpful community about these changes and more on our #esi slack channel.